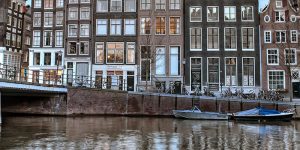 Tech startup Instabridge has already made a splash in their native Stockholm when they launched an app which allows users to find and share available Wi-Fi networks. Now the Swedish startup is setting its sights on connecting the citizens of Amsterdam by launching a network of over 300 Wi-Fi hotspots around the city and surrounding areas.

If you’ve never used Instabridge before, the startup has been featured in publications such as the Economist, the Guardian and Wired UK, and even went on to scoop up “Best International Startup” at the LAUNCH festival in San Francisco. Istabridge users benefit from reduced mobile-data usage and save both battery life and cash by connecting to one of the free Wi-Fi networks found by the app.

Although it is not yet clear when the scheme will be launched, residents and visitors around Amsterdam will soon be able to connect to the internet using one of over 300 free Wi-Fi hotspots installed by the company. Instabridge developers have also announced that although the Wi-Fi sniffing app is only available on Android at the moment, iOS and Windows Phone versions are both in the pipeline.

In the coming months it is expected that Instabridge will strike up similar connection plans with other cities across the world, reducing the strain that local telecommunications companies face to provide internet to data-hungry masses.