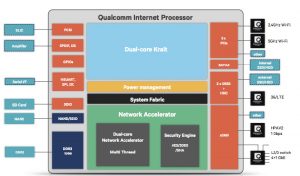 ), a new chip with a dual-core processor and a new packet processor engine that will increase performance for networking devices like routers and home gateways. The company stated that this was in response to the potential they felt networking devices still have to fulfill – while wireless networks are getting faster by the day their networking performance is much lower than it could be. “We believe a gateaway or router device needs to keep up.” said Todd Antes, the vice president of product management at Qualcom Atheros. “The last couple of years, that has been driven by video.”

The new product line will support data transfer speeds of around 5 gigabits per second across networks, which is about three times more than the typical data rate. This will tackle networking traffic related to movies, gaming and so on. Antes said that the technology was built with mobile networks in mind, “so this device can scale down to low frequency and power when it’s in standby mode.”