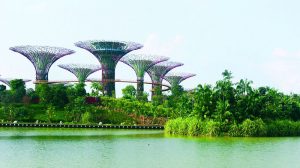 The reclaimed Gardens by the Bay are a beautiful getaway a few minutes from hectic downtown Singapore, and now the gardens are also playing host to the trial for the country’s new “super Wi-Fi” white space program.

The Singapore White Spaces Pilot Group announced earlier this month that the city would be the testing grounds for the pilot deployment of TV White Spaces connections. The idea behind TV White Spaces is that Wi-Fi will be transmitted across the now unused VHF and UHF frequencies, which had previously been used to broadcast television. Since these white spaces are on the lower frequency bands, the connections have the capacity to transmit using less power and over longer ranges, which is exactly why it is being referred to as “Super Wi-Fi”.

Super Wi-Fi connections should apparently be able to transmit data over 400 meters, which adds up to a potential network coverage that is 16 times greater than the area covered by current wireless networks. It is hoped that if the pilot tests are successful then free public super Wi-Fi will be rolled out across the whole of Singapore within the next two years.