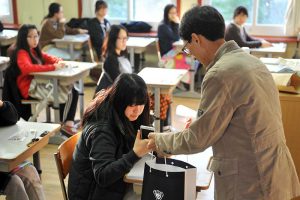 Students in South Korea are known around the world for being driven hard to succeed by parents and teachers. An official body in South Korea is reportedly moving forward with a plan which will make it easier for students to concentrate by remotely locking their smartphones during school hours.

Reportedly, an app called iSmartKeeper may be put into use in South Korea in order to restrict the services and apps which students have access to while at school. Teachers will supposedly be able to choose from several lock modes for all smartphones, including turning off apps, allowing phone calls only, or completely disabling any activity.

The idea behind the South Korean incentive is to keep students free from distractions in class, allowing teachers to have full control over their smartphones. Teachers will be able to enable a single app, which will allow students to retain access to educational aids or research resources.

So far, the remote system has been in trials at 11 schools around Seoul with mixed results from students and teachers alike. Although the system seems to be far from perfect, the Office of Education is reportedly advising all 677 schools in the Gangwon province to begin using the app.