Church of England authorities at 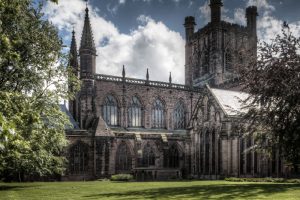 Chester Cathedral in the UK have removed the venue’s Wi-Fi network in a fluster after it was discovered that there were no restrictions placed on the holy connection.

Chester Cathedral’s Wi-Fi network was removed indefinitely after unsecured networks were investigated by journalists from the Chester Chronicle in what must’ve been a remarkably slow news day. Local church authorities realized that the cathedral’s available Wi-Fi service had no network restrictions on it, meaning that users could browse for all sorts of unholy data.

The fact-finding local reporters from the Chester Chronicle were very quick to point out that access to all websites meant that Wi-Fi users could easily be using the network to access obscene material. The newspaper decreed that locations with unrestricted Wi-Fi were allowing shoppers and passers-by to access Pornhub.com, though how they jumped to that sordid conclusion is not quite clear.

Officials at the Cathedral stated that they had explicitly requested that their IT providers set restrictions to the Wi-Fi network specifically to ban websites which included gambling or pornographic images. The network will be restored once these restrictions are in place, forcing British public porn-surfers to walk down the road to the next Starbucks for their connection fix.