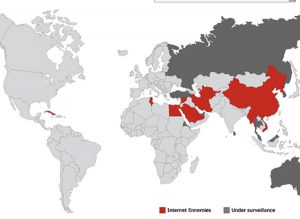 Each year, watchdog group Reporters Without Borders issues a list of “Enemies of the Internet”, shedding light on governments and organizations seen to be attacking privacy or freedom of speech on the internet. For the first time in the history of the organization, the United States has found its way onto the list, sitting side-by-side with North Korea and China.

Although Reporters Without Borders has never seen the US as a threat to internet users before, the past year’s revelations concerning the National Security Agency has turned that around. The watchdog organization has made it clear that it is not the entire American government which is a threat to the internet, but surveillance agencies such as the NSA which invade the privacy of innocent citizens.

This year, three democratic governments make appearances on the list, alongside totalitarian and authoritarian countries such as Iran, Saudi Arabia, and North Korea. Joining the US on the list of internet offenders are India’s Centre for Development of Telematics, and the United Kingdom’s Government Communications Headquarters.